Djm S11 is not supported for DVS on iOs system??? I’ve been using my S11 plugged into my iPad for over 1 year, I was even one of the first to use it on the DJAy Pro Ai with a pair of Rane Twelve MK2. This setup has been fully plug and play in Djay Pro for quite some time. Why the S11 was out of the list I have no idea, if even the S7 entered… Both the S7 and the S11 are Class Compliants… Setup - DJM-S11 , 2x RANE TWELVE MK2 ( I don’t need DVS but it has it internally) , iPad Pro M1. Any details I don’t know about during all this mixer time? @Guillermo @NathanielAlgo

Thanks for reaching out about this. The Pioneer DJ DJM-S11 was listed as only natively supported on djay Pro AI for Mac (and not iOS) because in our testing, we discovered that you have to use a workaround to get the DJM-S11 to work on iOS. Since it doesn’t work via simple plug-and-play, we didn’t include it in the list.

That said, here’s the workaround:
Every time you turn on your DJM-S11, you’ll need to first connect it to your Mac or PC before connecting it to your iOS device. You’ll then need to run the Setting Utility (which should launch automatically), which will configure the mixer to use the phono audio inputs. These need to be configured as shown in the below screenshot from the DJM-S11 Setting Utillity: 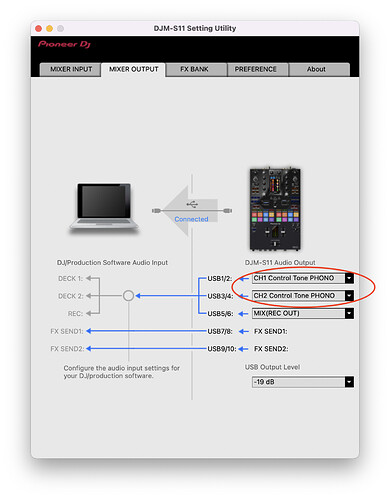 DJM S11 Setting Utility1420×1816 196 KB
Unfortunately, the mixer forgets the settings when its powered down, so this is why you’ll need to connect to a Mac/PC every time you turn it on.

After following those steps, you should then be able to connect the mixer to your iOS device and it should work as expected. I hope that helps, and please let us know if you have any other questions!

I love you Emily!! I love the Team…I love Algoriddim…lol. The explanation is simply fantastic… Where we can see that Ms. Pioneer made a small mistake by not putting the possibility of making the Timecode Line or Phono adjustment in the Mixer itself… several adjustments are possible but this one in particular is still necessary to plug the Mixer on a PC. The observation that I take the opportunity to leave is that in Timecode systems that use the LINE Signal, such as PHASE and my own Twelves Mk2, the Mixer will be able to work immediately, correct?? As it does not memorize the Timecode Phono option internally, it will always be in Timecode Line. I will do some tests in this environment and return with the impressions. @Emily

has this been fixed without having to connect to mac?

In my observation it is Pioneer who should solve this with a firmware update. I believe that the Algoriddim team can have a good argument for Pioneer to make this function available in a new Firmware.

DJM S3 is not a class compliant device. Only the Midi part of it can be used, not the audio interface.