I simply love the “Pro” viewing mode that we got with djay Pro AI on macOS. It would be awesome if we could have it on iPad as well since that is my main platform. Right now, on iPad I have to do a lot of taps to see information like FX, cue points, beat jump length and more. I am including a screenshot of Pro mode from macOS’ djay Pro AI just for reference. 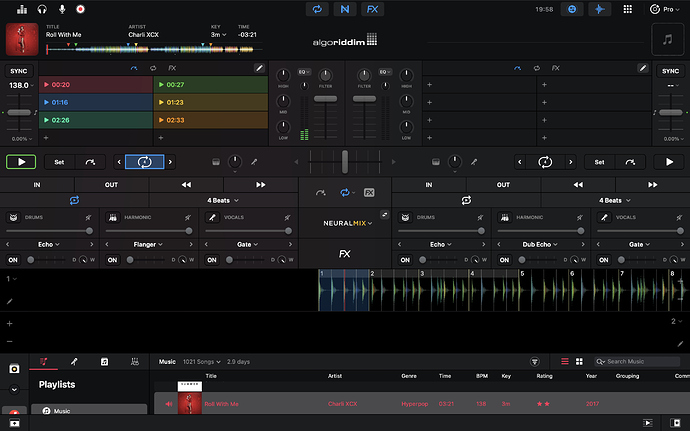 Due to the different screen estate we wanted to have a more compact representation on iOS. Could you point out the user interface elements that are important for your routine? That would help us, thank you.

Sure! Your question made me realize that what I want is a viewing mode made with controllers in mind. That means I don’t need big touch targets but rather need to be able to see what effect it will have when I press this or that button on my controller. I have updated the title accordingly.

For my purposes, it would be great to have the following:

Each of the points above, save the first, is currently handled separately which means I need to interact with the iPad to see that information. My goal would be having to touch the iPad as little as possible, making my controller the main and mostly only input.

The middle area where we have the volume faders and the filter knobs could get reduced a lot because it replicates what I already have and can see on the controller. Same for the area at the bottom - I already have all this information (except for the Neural Mix part) on my controller.

Just came across a great alternative: Arranging one area of the screen to match which mode your controller is in. So if my Mixon 4 is in Hot Cue mode, the screen would show Hot Cues but if I then change to Sampler or Slicer it would instead show that part. That would be incredibly powerful and would make the screen a true enhancement to the controller.

I still think Beat Jump and FX should just always be visible because FX controls are also always there. An alternative would be to make Beat Jump correspond with Loop length (I would actually love that, having only one control and being able to change both with the same knob).

Here’s a GIF from Rekordbox that shows what I mean (observe how the top area changes when the mode is changed on the controller):

I couldn’t agree more. This additonal view mode would be perfekt. @Lukas_E What’s your user base? Do you have data, how many users are using DJ for iOS standalone? And how many do use it with an additional hardware controller. My guesss would be that any more professional DJ uses it with his or her controller.

+1 here as well….I’m not quite sure why we can’t have a selection of the screen layout dependant on controller / no controller attached.
We could then potentially have the macOS view as a 12.9” iPad is not that much smaller than a 13” Air.
Or as mentioned having the screen elements automatically adapting to which mode the controller is placed in.

I keep saying it’s time for the IPad 12.9" to be treated like the Mac and get all the features.

It does not make sense duplicating the features of a DJ controller on the screen when the controller is being used. It’s a waste of screen space.

And don’t get fooled by the 12.9" iPad being smaller than the 13.3" MacBook!
The iPad has a LARGER screen area than the Mack book. It’s only because they measure the diagonal like they do with TV’s that it seems smaller.

So Equal rights for IPad 12.9" iOS and MacBook macos please

Upvote from me on this, as I would like to move from OSX to an Ipad!

Which values and controlls should be shown in a PRO mode on iPad? When a hardware MIDI controller is connected?

The general answer is quite simple: Show everything on the iPad screen that is NOT on the controller.

The playlist should not be shown at all. Show this as a seperate screen/popover

The new update goes SO MUCH in the right direction here. I would still love it if the mode could be switched based on which mode the 8 pads of my controller are in but that’s relatively minor compared with finally always seeing my first effect

Agreed, this is the right direction! Keep going with allowing us to get more screen real estate with the vertical waveform view, 4 side by side. I’d love to be able to eliminate the browser when just playing, so as to see more waveform.