Greetings:
For the first time yesterday, I’ve taken my SX2 DJ controller to a museum gig, and used my new iPad Pro with it. I have tested it out at home, and practiced there, and works nicely so far.

After sound check, I went away for awhile and my iPad went into sleep mode. When I got back to turn on the device and get back into Djay Pro, the connection with the controller no longer worked. I tried unplugging and plugging the iPad back in, but that did not help. I tried a few other things, and then finally I turned off the controller and quit DJay Pro via upper swipe.

I then turned on the controller while opening up DJay Pro, and a connection finally was re-established.

First, is this the right way to have a successful connection from the get-go every time I use it? Second, when my iPad goes to sleep and I have to wake it up, is there anything I can do short of having to practically restart everything?

I have been using iPads with pioneer controllers since djay 1 and things change based on iOS and Djay updates. Here are a few thoughts when now using my iPad Pro with a wego3.

1: I always have auto lock turn off now. I can’t afford to have ios decide when the system goes to sleep and might not come back properly (I use the power button to make it sleep if I need to).

2: Make sure (since iOS 11) you have the setting “USB accessories” turned on in the Face ID section. If you don’t have this on then your IPad will cut the USB after an hour (and this could hang the controller). 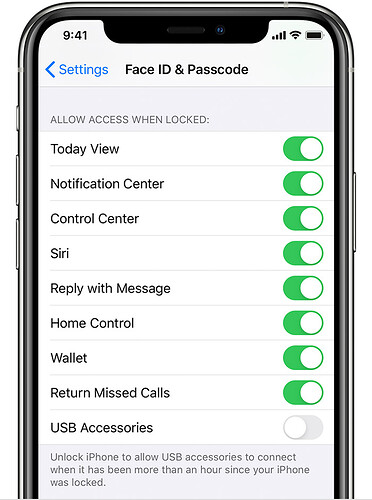 3: If after unlocking the IPad the controller is not functioning but you can still use Djay on the screen, then it usually just needs the controller power turned off and on to re-establish the connection for me.

4: If Djay has frozen. Then sometimes powering down the controller will bring it back & if not you need to kill it and re-load.

5: You are probably using an apple adapter or 3rd party hub so you can still charge the IPad while using the controller. They can hang from time to time when the iPad is off and need resetting (but it could be because of no 2 again).

Hopefully your issue will be no:2. Unfortunately these issues are always changing based on iPad version, iOS version & controller.

I used to be playing a live gig, need a quick break, put on a 5 min track to be sure I would get back in time, lock the iPad by pressing the power button so no one could screw with it and walk away. When I came back, touch the screen, enter code (before Face ID), and carry on.

I don’t take that chance now.
Hopefully someone else with an SX2 may have more info.

Hey thank you! That’s all really useful info. I’ll test them here at home, over the weekend.

One gotcha I’m running into is that as of now, with the Apple USB-C to USB adapter, it’ll recognize and work on the device, but otherwise the iPad Pro will not charge. I might have to look into a different adapter, and the USB-to-Digital A/V one costs $69, which I’d have to justify paying.

I don’t take the controller out that much….yet. Me and my DJ crew use turntables and either vinyl records or Serato, but I am preparing to make use of my controller a bit more, especially for solo gigs. I’m pretty bullish on DJay Pro and using the iPad, and I’m willing to invest the time innit.

Quick reply, running out the door to DJ now.

If you have a usb c to usb a adapter ie. Only 2 ports. It cannot charge your iPad.

The apple av adapter has the addition of the usb c socket (and hdmi) that allows you to plug the iPad charger into it so the iPad can be charged at the same time.

Be careful without external charging as the iPad Pro’s charge drops fairly quickly when using Djay Ai, especially if you are using a lot of advanced features constantly.

Happy to be of help

Gah! We’ll, I guess the digital a/v adapter is soon part of my future, like I knew it would be. I quibble at the cost, but then that would be going against my own device, which is to bite the bullet, get the OG apple accessory, and avoid third-party hassles. I’ll keep the other adapter that I have, but really good to know that the AI features can become power sucks for the battery. After doing music for a bit over two hours last night, at least my fully-charge iPad Pro still had 40 percent of charge left. But yeah, I know that I constantly break the recommended time that the device is supposed to hold a charge, because of what I use it for (video editing, music production, DJing, on top of productivity), so good to know.

Thanks again, and hope your gig goes well!
V.

Don’t bother with the Apple A/V adaptors, they’re quite restrictive.
Buy something like this from Amazon.
It’s the one I use, not only does it allow you to power the iPad and connect your controller (I have an SX2 as well), it also allows you to add a hard drive to the set up further down the line if you wish.
You can also play with Djay’s video section as well if you fancied as this also has a HDMI out too….all in one handy unit, much more adaptable than any of the Apple offerings.
Also, it doubles up as a useful peripheral controller for you laptop if you ever needed it.
That would be my recommendation anyway, works really well for me.

Completely agree about the Apple adapter and never bothered getting one. I had one similar to yours (9 in one) which I used for over a year but was upset about two things. 1: it had a fixed cable that I knew would break eventually and 2: I still had to carry around a dam charger with another cable to plug into it to charge the iPad.

So now I have an upgrade which is amazing. And of course you get what you pay for so it’s more expensive. 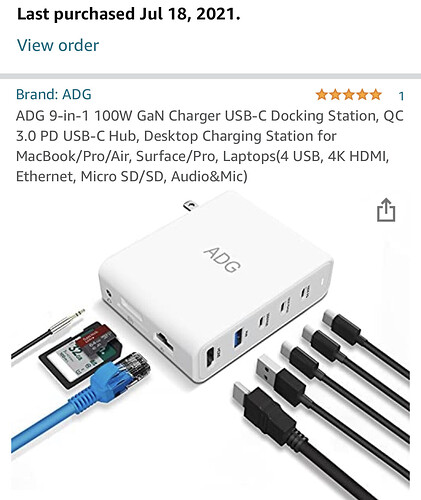 100W charger & 9 in 1 hub combined.
Plugs in like an apple charger or use the 6 foot mains cable with country adapters.
It takes the iPad in the usbc port or usb a port and charges it.
At the same time you can charge a MacBook (I charge my iPhone).
Memory card slots, network, headset & hdmi.

Works flawlessly so far. You can see on the picture when I bought it.

Double the price but the iPad charger was only 15W and wasn’t big enough to charge anything anyway, let along power a usb controller at the same time so this addition is a steal as far as I’m concerned

Think you can only get it in USA at the moment. 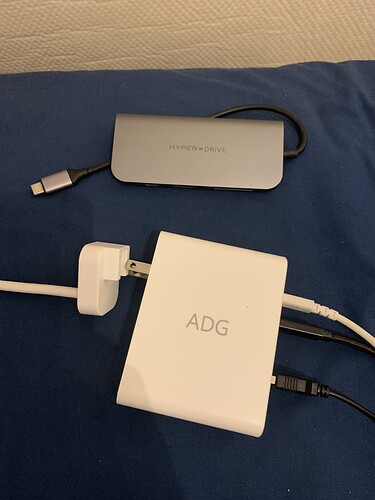 image3024×4032 2.59 MB
It comes with a usb c to usb c for the iPad and I love the fact that you can use different length cables or replace a damaged one whereas the other adapter hangs off the side of my iPad looking stupid like a home/school experiment with wires everywhere and fell out a few times.
You can hide everything with the new one.

Still using the old one which is great as a home set up now and the cable isn’t getting mangled by going in and out of my back pack. Should last much longer now.

Hey thank you both for the info; it’s really helpful.

I’ve gone through enough third-party adapters that ended up with an “Accessory Not Supported” message, that I grew frustrated and weary and decided that the Apple ones were going to be the most reliable. To that end, I’m glad that I do have choices. I do have the Hyperdrive, but at the moment iit doesn’t seem to work with the iOS 15 beta (I am confirming this with Hyper support). But I’m sure the others you mentioned will do as well, with the added benefits you’ve mentioned. I’ll look into them, considering that I’m sure that I’m gonna use my controller a bit more.

As ever, much appreciated!

I’m DJ’ing right now with iPad Pro and hyper drive.
I wouldn’t even touch iOS 15 if it was available as a release for Atleast 3 months. If something is working, dont try and break it, let others test it for you 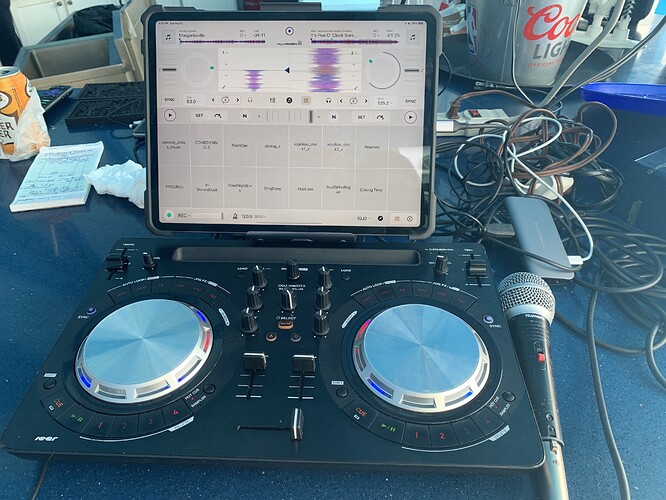 Ps. See how it looks like a rats nest lol.
The new adapter looks much cleaner. I’ll post it next time.

I put on the iPadOS beta the last two years due to features that I wanted to use now instead of waiting (actually, I wanted a couple of months before joining that beta). I had some hiccups, but nothing serious. I would say that though not being able to use Hyperdrive is perhaps the most “serious” gotcha that’s happened to me during the beta program, at least I have other ways for now to work around it. Even Hyper support replied to my email today that, rightly, it waits until the final release before worrying about fixing things that berea.

So yeah, a second update, but a significance of a different kind.

I’ve decided today to switch from the 12.9" iPad Pro to the 11" model. Having recently. bought the previous model, I was within the 14-day exchange window. Not only did I get the smaller model, but I also bought the Magic Keyboard, since the larger one I own will not fit. Afterwards, I still have some pocket change left over…via an Apple Gift Card, of course.

As the new device is getting the iCloud Backup applied, it became a good excuse to stick with iPadOS 14 and not mess with the beta. Because of this, I’m able to use my Hyperdrive hub again, which will charge my iPad when a USB charger is attached.

So far, I’m really happy with the smaller and lighter size. After going through three iPad Pro models in the bigger size, it wasn’t until I checked out the smaller model at at the local Apple Store today that I was convinced that the smaller model is something that I can work with. We’ll see how the experience goes.

Again, much appreciated to all of you for the helpful info…if not for me, then maybe others down the line.

We tried several and found this one to be the best USB-C hub to use with iPad. It even has an extra data USB-C in addition to USB-C power and a built in sound card, useful in case your controller stops working.

You also need a beefy power source. We use 60W sources and run a USB-A hub connected to Akai MPK Mini, Akai LPD8 and sometimes other devices. We are using these: Amazon.com: Powergence Pro 110W 5-Port (USB C and A) PD Wall Charger and Power Adapter with QC 3.0 [The Solid Goods] : Electronics which are nice because they have 3 USB-C and 2 USB-A and provide ample power for everything.

And set your iPad to never ever sleep.

Thanks for all of the contributions, folks. I think I already have all that I need in terms of hubs and power, but maybe a longer USB-C cable to plug into the portable hub to keep the iPad charged. I’ll experiment with that, soon.