How to Correct DJay’s key analysis

Many users, including myself, get incredibly frustrated when Djay displays a song in an incorrect key.

For example, there’s a popular Afrobeats

song called Godly by Omah Lay. Despite the title, it’s not a religious song and it’s not by a gospel artist. But that’s not where the confusion ends. 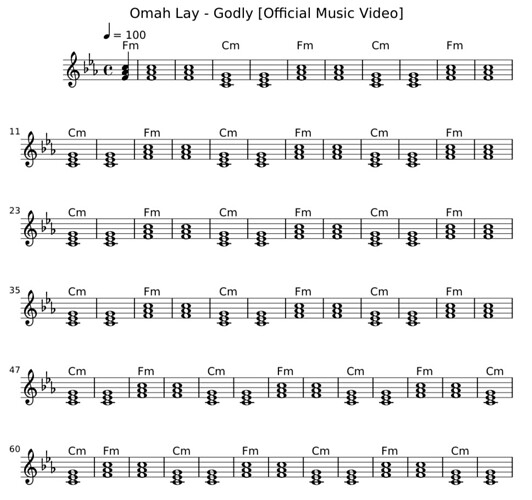 Djay analyses the song’s key by displaying it as Cm.
However it’s very clear that the song’s tonic (root note) is F and that the ‘i’ (one chord) is minor. We would therefore expect it to show Fm. If we had the ability to manually correct and override the key analysis result, we would simply change it from Cm to Fm. Problem solved.

However, there is more than meets the eye here.

…Djay knows the tonic (root) is F and that the one chord is minor (Fm).
However, it still displays Cm. Why?

Because the above seven notes contain three flats.
Looking at music theory’s circle of fifths, we can see that the key signature that relates to three flats is E♭ major and C minor.

E♭ major (Ionian) and C minor (Aeolian) are only two, out of the seven modes, that use these notes. In DJay’s settings, we can display key information as Major (Ionian) or Major/minor (Ionian/Aeolian). This is what Djay has done, it has detected three flats and displayed the song as Cm (Aeolian).

We know the song is in Fm. What’s going on?
Where’s the mistake?

E♭ is the relative major key (three flats). Not A♭ (four flats) as we would expect of F minor.

It would be helpful to list all the modes of E♭ Major here:

Djay can only show us Mode I (Ionian) or Mode vi (Aeolian), meaning it can only display E♭ major or C minor.

However, the correct key of the song is:

This is Mode ii. Djay cannot (yet) display “Fm▵⁶” (f minor with a major six). It cannot tell us that the song is Dorian (mode ii).

What does this mean in terms of mixing?
If the main bassline is home to F (dorian/minor), then showing the song as Cm (as Djay currently does) or E♭ Major, is not helpful. Cm (Aeolian) is the relative minor to F Dorian and E♭ Major.

As a music theory geek, I know this.
However, there can be even more confusion.
Here are just a few examples:

These complexities, whilst popular due to how beautiful they make the music, are beyond the scope and limitations of simple key display info.

There may be many more reasons why a key may be detected incorrectly. The song may use the Blues Scale for example, which combines the major and minor scale with blue notes and may omit the tonic’s natural tritone (Major Scale minus Tritone equals Pentatonic Scale, 7-2=5).

If the key analysis detects the F major blues scale…

…then what’s Djay going to display: F or Fm?

It’s an oversimplification to simply label a tune as “F major” or “F minor”. The rhythm, harmony, chord progression and much more, are all factors in creating a great mix.

This is why, no technology at this time, can replace the human ear and brain, when it comes to mixing, song analysis and interpretation.

It would be great if the computer/device/AI/machine-learning could give us the correct information in the way that we want it… but then what about the true art of music and mixing. This takes experience, a feel and an understanding (or overstanding) of the music.

Therefore, this post is not designed to “solve the problem” and may raise more questions than answers.

However, if you wish to understand why Djay analyses so many songs in the “wrong” key, then what’s been discussed in this post above may be helpful.

Bro, great write up, but DJay is right. Cm (Natural Minor) is the key of the sheet music. Modes are not keys. This song barely has a tonal center with only the chords you have provided.

Here is my question, there is a BIG difference in keys between “analyze” and “match” with match being more accurate, how can we apply match to the library?