Improvements for the UI/UX in iOS on iPad

Please make the following adaptions of the iPad UI available - at least as optional configuration that can be set by the user:

(1) Make it possible to move the playhead marker (the vertical red line) further to the left. So that one can see more of the upcoming waveform. => This has also been suggested by others in the old forum.

Ideally the configuration contains a setting where the user can enter a percentage value where the playhead should be. 0% - at the very left, 50% in the middle (default), 100% at the very right.

(2) Show the number of bars from the current playhead position until the next cue point. This can be very handy for mixing. Very often a DJ wants to fade out the end of one track for example for 16 bars. The new track then needs to fade in for 16 bars, e.g. until a drop in electronic music. The cue point is placed at the drop. So the second track needs to be started 16 bars before the end of the currently playing track. That is not easy to see right now. The number would really help.

(3) PLEASE show the filter and loudness fader next to the track they belong to! Bottom track with its own loudness fader its own filter values. Same as for top track. Please do NOT show both loudness faders at the bottom, where one does not belong to that track. 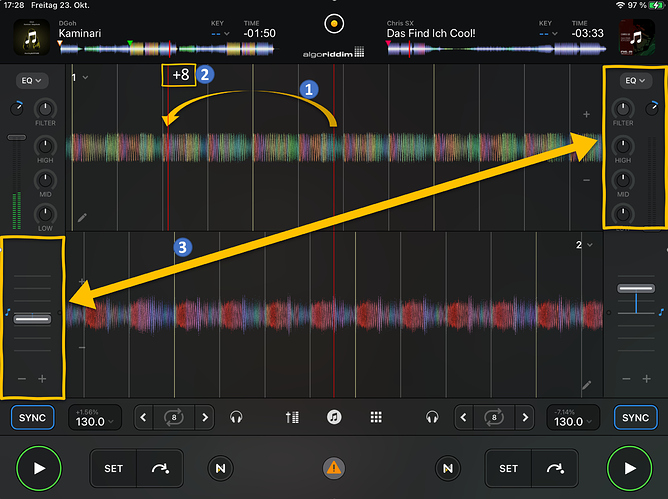 Thank you for getting in touch and these two great suggestions.

It would be nice if other users share their thoughts on the two and upvote the topic. I also added the two to our issue tracking system.