There isn’t enough space to display longer track titles in the browse section.

Most of my tracks don’t have very short names as in the manual example. 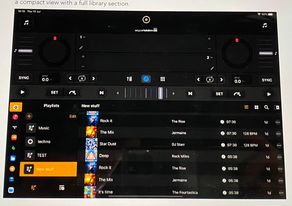 With the amount of space available for track names I only see a truncated name that looks like:
Louie Vega - You Got Me Dancing ft Audrey Wheeler & Cind

Obviously this gives no way of telling which is the mix I want to play.

(The only way to find out is to lock the iPad, the press the button so it shows “now playing” on the lock screen and the title of the song scrolls across, revealing the full title).

An ideal solution would be if the title of a song loaded into DJay would appear in full, even in a smaller font would be fine. Even if it were to scroll across so you could read the entire title by waiting a few seconds would be better than the current situation of having no way to see the full title in DJay.

A useful compromise to read most long (but maybe not super long) titles would be to have the ability to remove the “artist” column so the entire width of that window showed only titles, which would show many more characters.

At the moment there seem to be no options to select which columns are displayed in the browse window (or in which order, both of which most other software seems to have), which seems a bit lacking.

Anyone else find this a problem or have any input to add?

I have the same issue and it is a big problem. How about seeing a button in the Track list that you’re browsing to open a details pop up window for that particular track in the list

I’ve been waiting for text scrolling for longer names in the Music Browser and also on the decks themselves for ages…
V4 not changed anything unfortunately……
We still live in hope, things are getting fixed / amended / changed on every update so fingers crossed!!

Agree. I have a 512g iPad Pro with 100gigs of dj edits from various dj pools. I can’t tell which versions of the mix I have loaded. Scrolling title would be great or at least a library screen tab that shows full metadata would be great.

Thanks so much for the suggestion!

I’ve made sure to pass this along to our dev team for further consideration and will update this thread when any new information comes in.

Have a great day!