Please allow the user to have the KEY to ON by default.

As a long time djay user I find myself turning these on every time djay loads.
Why is this Off?
Is there anything I’m missing? 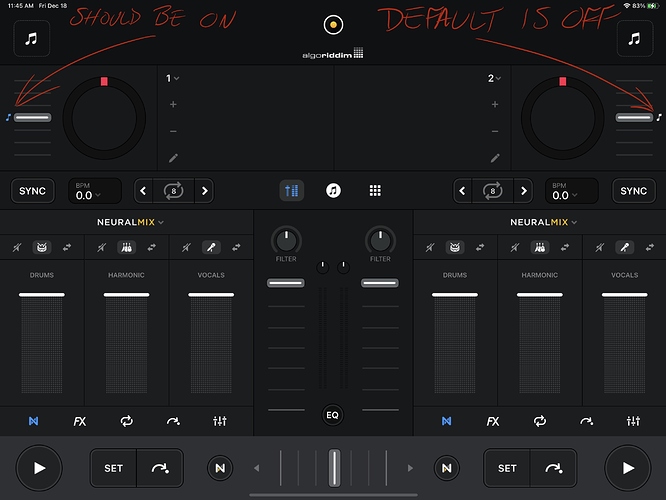 Would love that! I have to remind myself of this every time and it can become weird when I forget it. Should be a setting, IMO

I would like to see this added as well. I always have to remember to turn it on when I start my set.

Myself also. I forget AAAAALLL the time haga

Hey Team,
We have a bit of a vote going.
Any response on this suggestion?

Was kinda hoping this would be on the new update.
Keeping my fingers crossed.

Great work on the update.

Another +1 here, in fact there should be a whole dedicated page in settings for all manner of things that we might prefer not to have to set every time we fired it up….
Sync, key lock, NM instead of EQ on the knobs, 4 track NM not 3 etc etc….

I agree with @sooteee. Please give us a user settings page

@Slak_Jaw,
A user settings page would be awesome.
So many settings need to be set every time Djay reboots.

Still not an option on the lastest update?

I’m going to give this a +100 for not only Key Lock, but other settings, such as quantization etc. Really, as a pro, need things like these settings to stick. Every time I reopen Dj, I have to turn these back on. Please make these settings stick for the next session. Would be infinitely helpful!

Another upvote for Key Lock to be on by default, I have no idea why it would be a feature that hasn’t already been integrated…

Just trying to keep things tidy and organized, so I moved your post over here to this existing topic with the suggestion to keep the Key Lock set to on as a default setting. Thanks for sharing your feedback!

All old threads were closed in June 2020 because the forum software was changed so this is unrelated to the feature request. Still, I would also love the key lock to be on by default.

You are saying that because algorridim closed the threads due to the software change that they became old and irrelevant and that the time and effort users put in to +1 the bugs & requests should be forgotten about. I know there is another thread for key lock, but it looks like it only became a new issue in 2020 rather than 2012.
I see noobs every week thinking they have come up with a great new feature request that was asked for years ago and should have already been implemented, but were closed off.

And if you notice I wasn’t trying to hyjack this thread, I was replying to the owner of the thread , Frgld who mentioned that he was patiently waiting for the pitch lock setting. He probably hasn’t been waiting for 9 years like I have!! I was just trying to get across that people are getting frustrated that a very simple on/off switch hasn’t been implement after 1 year!, when it has really been 9 years for the same dam setting

. But of course, aimlessly wirelessly waving yours hands around trying change fx & adding Shazam (am I really going to Shazam my own music while DJ’ing to find out what I’m currently playing) must take presidents over an irrelevant on/off switch that frustrates just about every one of us each time we start Djay (unless of course you are the old school type of DJ that loves the sound of Mickey Mouse or the chipmunks on a pitch change

That’s my vent for the year

I DJ live with Djay AI IOS seven days a week. Turn my pitch locks on everyday using the screen so I get better use of the buttons on the controller. Stopped thinking about it 7 years ago until I saw people still asking for the same old S**t …

Sorry to have ruffled your feathers like this, didn’t mean to trivialize and I think it’s great how you pointed out the history of this feature request, thereby raising its relevance. What I meant with my sentence was only that all threads had been closed, regardless of their content, so it was not a deliberate decision because the request for key lock was deemed unworthy.

I very much agree with you and think it’s great to see the stuff that people have written about in these forums before and at the same time sad that we cannot just continue in the old threads.

@djjoejoe and @SteNight, I’ve also moved your posts regarding this feature request over to the relevant topic thread to try to keep these topics as organized as possible.

I also just wanted to respond to your “vent for the year”, @SteNight, and let you know we do appreciate your continued support and please always feel free to point out what features you still want to see (even if you’ve been pointing it out for years, as you’ve said

). What @djjoejoe said is 100% correct, that the old Forum threads were closed, regardless of the content, at the time that we migrated to our new Community platform. We didn’t want to lose all of that important history of topics/discussion which is why you can still find the information here on the new Community (in the Old Forum category). Our team truly cares about the feature requests and feedback we get from all of our users like you, so thank you for your continued support and for continuing to provide your valuable feedback.

And regarding this particular request, please know that I’ll push it again internally with our team and we are listening. Thanks to all of you for being active members of our Community!