These same files will play on my Mac, but will not play on my Iphone version of Djay despite the fact these files no longer exist ( upgraded to 256 kbs drm free). What am I doing wrong here?

What do you mean by “they no longer exist”? Please open the Music app on your iPhone and check whether there is a cloud icon next to the song(s) or at the bottom of the playlist.

I’m not quite sure if iTunes Match actually removes the DRM-protection. Please open iTunes on your Mac, locate one of the affected songs, ctrl-click on it and select “Get Info”. Please upload a screenshot of the Summary tab.

Also, which iOS and djay version do you have?

Please open iTunes on your Mac, locate one of the affected songs, ctrl-click on it and select “Get Info”. Please upload a screenshot of the Summary tab. OR, please send a test song to support@algoriddim.com.

What I mean by “no longer existing” was in reference to the former “drm protected” music files. Over 95% of them were downloaded and replaced from the ICloud with the AAC 256kbs files. This was done on both my Macbook, where I no longer have this issue with Djay, as well as done on my PC where my Iphone is synced. However, those same music files will not play on the iphone despite the fact that these same files were downloaded from the cloud and synched to the phone. I hope this follow up provides you some direction. Also, there is no cloud icon status next to any of these these tracks, They are just “grayed out” or inactive.

Let me start from the beginning as we seem to be going in circles. I DO NOT HAVE AN ISSUE with Djay on the files in my MAC. I Home Share these files with my PC where my Iphone syncs, however, the problem exists in the Djay app in the Iphone. These files WILL NOT PLAY there. If the DRM protection was not removed, then they should not play in the Mac as was the case prior to me matching them in the cloud. My version of Djay for Iphone is up to date as far as I can tell. I believe there was an update within the past 10-14 days that was done successfully. Thanks.

Here is a shot of the several songs (that are greyed out) that will not play in the Iphone version of djay. Focus on the track by Alicia Keys “No One”. 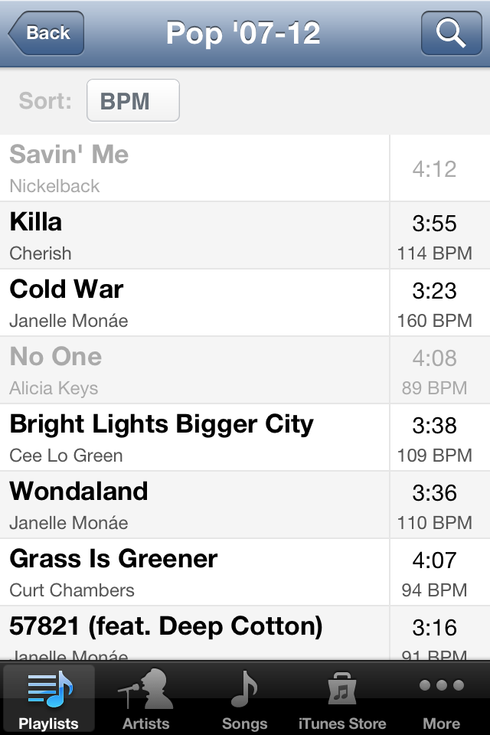 Now take a look at the same track’s information that is in my Mac. There is no indication of it being DRM protected. My iphone syncs with my PC, but the library is shared between my PC and Macbook. 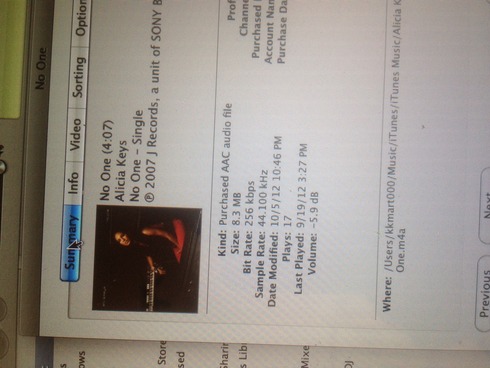 There are probably several hundred examples of tracks that fit into this category, they will play on the Macbook version but will not play on the Itunes version despite there being the shared library. Please assist in solving this issue. Thanks.

I have the same issue as Kevin. I did try Warren’s solution. I have an iTunes playlist that I’ve downloaded all the songs from iCloud onto my iPhone and can play them in the Music app fine. However, when I go to djay and go to the same playlist, the songs which I downloaded from iCloud that were supposedly now all DRM free are showing up gray. These are old songs that I know I downloaded from iTunes that had DRM on them.

Im having the same issue here i am not able to play songs on my Djay app as well that i have had on my phone for months and that i know i have used on the Djay app and now they are not working and giving me a “Could not load track” message…and Warren i dont really understand your solution either when i go into the Music App and create a playlist with the songs that are not working in Djay app there is no cloud button or download button (maybe because i dont have itunes match?). On my phone Djay will only show songs that are downloaded to my phone because once i delete the song from music app then it does not show in songs in Djay app…Again the songs that the Djay app are saying could load track i have had on my phone and I KNOW i have used in Djay app before.

I have same problem. songs greyed out that I purchased from iTunes Store on my iPod. I’m not using iTunes Match or cloud. these songs are on my device (iPod touch 5th gen)

All of these songs worked fine on Djay on my 4th gen iPod. But about 60% are now greyed out.

But… now loads of the songs don’t work!!! This is insanely frustrating!!!

Note… ALL of these songs work completely fine in other apps but not in Djay. And they are definitely on the device, not in cloud. I can listen to them when not in wifi area and there’s no little cloud buttons to download them.

what makes this more annoying is that I’ve just bought a very expensive controller to use with Djay on my new iPod. but most of the songs I want to play won’t load!!! (this is nothing to do with the controller, I’ve paid for it but still waiting for delivery)

this problem really needs looking into, from reading this forum it seems several people are having similar problems on songs that are def not in the cloud or DRM protected. what’s going on?!?!

same problem - bought iTunes match in order to unlock DRM protection - still many songs greyed out on djay for iPhone and unplayable! What’s the problem?

I have a solution - delete ALL music data stored in the iPhones memory - Settings - General - Usage - Music -Edit then delete. Reload from the Cloud after upgrading to DRM free/iTunes Match or resync via iTunes. After this all my songs and albums function with djay.