Single spinner in portrait mode for ipad like iphone

you know how on djay for iphone if you tur it on portrait it turns to a single spinner?it should have the same option on the ipad version. because i use two ipads and a mixer for my set up and its kind of inconvenient to have to use the iphone version on the ipad because the quality and other things arent as good. 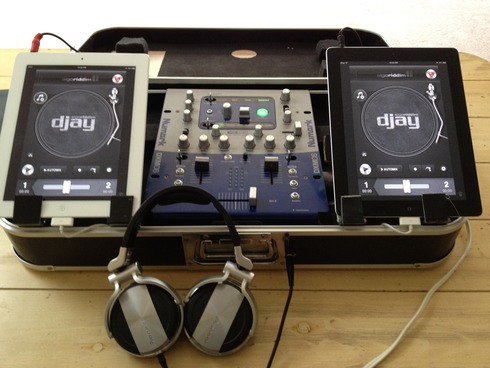 To be fair, the iPhone version is now pretty close to the functionality offered on the iPad version, give or take a few features. Because the UI on the iPhone version has been updated to cater for retina display, when expanded to ‘x2’ on an iPad it’s much better than before.

Ideally you’d also be able to use the Sync button over bluetooth/wifi so that one iOS device knows about the track on the other device.

We’re proud to present djay 2. This feature is now implemented in this new version.

thanks rob! and dj hombre, its just not the same though lol the quality is still no where near as good and i wanted some of the features from the ipad version on prtrait mode too. but now i i just actually use the ipad version but my ipads are on the sides, so now i have a quad deck lol

oh and i tried what you said about using bluetooth or wifi and i couldnt figure out what u were talking about?

Signed up to show support for this.
Bought Djay for iPad expecting to be able to do this like on the iPhone.

I found mountains of requests for this googling the old forum.