What do you think on the new Stem separation in Serato

I was never a fan of the Neural Mix functionality in Djay since it is sounding not good for me. The new added Stem separation in Serato is sounding quite different. I would say it sounds like from another planet and the first time usable in live performances.

I really would wish we would get same quality in Djay.

It’s not only the quality, it’s also about how it’s implemented, as a drop-in replacement for one of your performance pad sections. Love that idea a lot more than having to switch back and forth between EQs and Neural Mix. Like you said, Neural Mix is often enough not good enough and I still like to have the EQs around.

First of all, I’m happy Djay has had it for some time now.

Secondly, I expect Algoriddim to improve the AI too. Just wait for stems V2.

There’s definitely a pad mode. I use the Rane One, and it’s the secondary functionality of the “saved loops” pad. Let’s me still use the EQ while using Neural Mix. Alternatively, if you have the EQ has neural mix, you can use the filter knob for EQing the stems.

I think this depends on your controller, mine doesn’t do that

In terms of sound quality Serato’s Stems are the best in my opinion. DJay and VDJ still have the most control and options with the stems… but in terms of less artifacts along with more separation and definition? Serato is #1. However, it is quite behind in terms of other things.

It’s easy enough to map Neural Mix controls to the pads on any controller in Djay Pro AI. The Reloop Ready comes with a Neural Mix pad mode pre-mapped for STEMS Solo and STEMS Mute.

Also Djay has been able to apply FX to individual STEMS for a long time now and I think it’s WAY more powerful that Serato’s implementation. Adding Echo Out FX to a vocal is quite easy to perform in DJay although I do like how Serato has implemented this on the pads. I would like to see Djay add more options for midi mapping STEMS FX to the pads.

It’s not about if you have to press a pad or turn a knob, it is about the sound quality.

At the moment, Serato STEMS sound clearer than Algoriddim Neural.

Apparently they advise offline processing unless you have a really recent (e.g. M1/M2) processor.

I would upgrade my hardware for better quality, but I think it’s good to have an option to not pre-process tracks. I definitely prefer real-time processing.

At the moment, Serato STEMS sound clearer than Algoriddim Neural.

What I thought was interesting is that they say…

Serato has said the company didn’t use AI for their results. Instead, it developed its own algorithm to handle the audio separation. 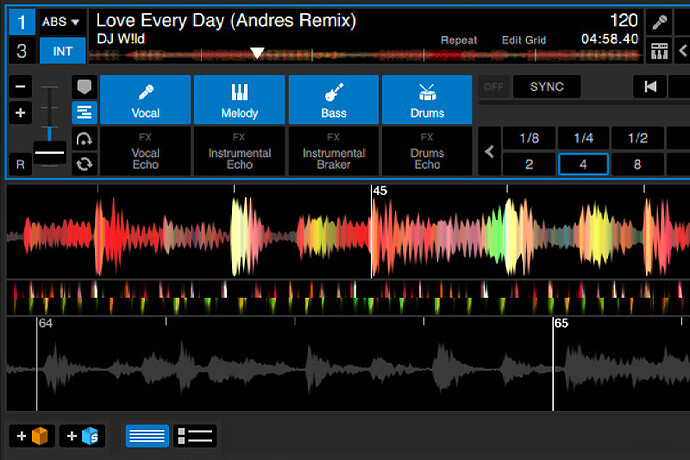 yes…all reviews said that. Even with a M1…

OTOH right now it’s pad only, which I think is kinda limiting the other way around as I like stem controls mapped to the EQ on my small (Mixtour) controller.

They’ll probably fix that before general release though.

I definitely turn to ipad for djing so I hope djay will improve Neural (and some other functions) to Serato’s.

This autumn will get really interesting. Consider that NI will also add Stem separation to Traktor Pro. If it will be built on iZotope’s Music Rebalance we should get similar results as in Djay as of the technology behind. But AI is not always the right approach and with algorithms you may get better results.

I like the stems on the EQs of decks 3 & 4, leaving the EQs of the two decks functional as well.
Not so keen on the pad approach as it’s an ‘all or nothing’ situation, they might change this.
The main problem for me is that I’ve been using Djay for so long, I looked at my Setaro on the MBP and realised I’d forgotten how to use most of it!!
Main program, P’n’T, Flip etc……not a clue anymore!

I have to say the isolated versions in Serato sound pretty good. Maybe they’re combining data from the other stems when you’re soloing a certain stem.

E.g. the Serato drums (solo) sound solid, whereas the Djay version sounds thinner and with more artifacts. Maybe they’re separated in advance (static) in Djay, which sounds fine when the stems are combined, but could be improved when selected solo (or in a certain combination) by adding (dynamically) some filtered out crossover elements / frequencies from the other / muted stems. If that makes sense at all.

Some post processing on for example vocals (e.g. to reduce compressor pumping) would be nice too. Although I imagine it could be tricky as you have to be careful not to introduce new unwanted artifacts.

It’s not about if you have to press a pad or turn a knob, it is about the sound quality.

I’m by no means suggesting that sound quality is not important. Certainly it should be at the top of the list.

However, I also hear a lot of people online making a big deal about Serato’s implementation of STEMs control on the pads and the STEMs vocal echo out feature. My point is that Djay has been able to do this and more for a long time.

The implementation of new tech is important and I prefer to have more flexibility in how I use new tech. Currently Djay has WAY more control over STEMs than Serato. Personally I like to map the EQs of deck C/D to control STEMs vs the on/off of pads. Also I like to have full control over what FX I apply to the individual STEMs vs what Serato thinks is best.

Yeah. What triggers me is how they’re selling it like it’s the best thing since sliced bread, where the reality is it’s only slightly better than what’s already been out there for over 2 years when it comes to sound, and worse when it comes to features.