Though the jogwheels feel different.

Is this normal? Do I need to configure it a certain way so the platters respond to the touch?

Hmm that’s strange . I am a FLX6 user ( until
the REV7 becomes available ) on DJAY AI on Mac.

So far no issues . Describe your issue again again please if you can

So, when a song is playing (on the 2 deck mode BTW, as opposed to the classic mode), if I touch the platter the song is to supposed to stop, right? So I can fast forward the song or bring it backwards as I want, Just as when you’re playing a vinyl.

With my DDJ-WeGo3 the song stops without a problem. So the issue is that, the FLX6 the platter won’t respond when the song is playing, ONLY if I press the scratch mode on (but then I don’t always want that crossfader madness) or if the song isn’t being played, in another words, if the play button hasn’t being pressed, but only the tune has been loaded to that platter.

Second issue, the jogwheel has like a glitching, it won’t work at some points, feels as if the platters had some sand inside or something stuck, the left one more than the right one, (shame I can’t upload a video here).

For the second issue I am pretty sure it is a problem, therefore I already sent the controller back.

But for the first issue described above I am in doubt whether this is the way this controller works or is a faultiness with it, which is the reason I am holding back to buy the same one again. If someone could confirm to me that it should work like any other controller then I will surely order the same model again hoping this time I won’t have these problems.

I don’t have that problem. I will Double check . It’s so obvious the way describe you it , I would think I would have discovered it as well.

Sometimes I think about leaving DJAY but there are some features that I feel I would miss greatly.

I know, specially the Neural mix, plus the ability to play from streaming sources.

Hi Guys, I just got a new DDJ-FLX6 and I connected to DJ Pro Ai and experience the same issue whereby you touch the the top of the jog wheel and expect the track to stop, but it continues to play, any help will be really appreciated thanks

Some of the Pioneer controllers like FLX6 has settings how jogwheels works:

Look up the manual for “jog cutter” button and “vinyl mode”. 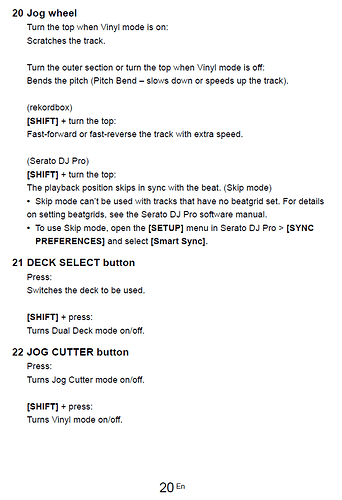