UPDATE: SAME PROBLEM ON MAC OS 12.0.1. Just downloaded update and trying to use on Ipad for first time. IOS 15.5 with Rane One with Ver 4.0.3 and everytime I try to switch functions to the FX Pad, which is why I wanted to try this, the music stops and the only way to make it play again is to reload the track. It acts like its still playing but no sound comes out and it cuts off as soon as I hit the function buttons in the center to switch to FX pad so I can swipe the FX.

This is more than frustrating and really annoying. I was in the same boat as you last week and luckily I tested the new update with my spare/backup ipad as I too had a gig last Friday night. Algoriddim, we have said this multiple times in the past, Pleas stop using your paying subscribers as Guinea pigs for your updates, and if you do choose to, at least leave us the option to be able to roll back to the previous update… The latest Update was supposed to include “improved support for Rane One…

I played a wedding today The iPad cut the audio off randomly while switching to decks and Deck A filter is so touchy at neutral it actives a full lo filter which cuts audio. We need an update asap whats going on

you could update iPadOS to 15.6… but that likely won’t solve the issue.
is the program unusable for you without the Rane controller? the controller is basically just an audio interface with added-on controls to simulate old-skool turntables and mixer, right? what if you just use the iPad screen as controller to some sort of simple audio interface that will permit cueing and syncing on headphones? everything happens in the iPad, after all…eliminate what’s causing the issue and work in alternate ways, if possible…

No. I do this for a living and I dont even use the Ipad. I was trying it out because of the FX pad feature and found this problem. Then duplicated it on the Mac OS. This is unacceptable for professional Djs. Need to get everything setup again on Serato to make sure I dont have any problems next weekend. Really unacceptable to have such a major issue with an update. Never happens with Serato. Bummed because I have spent a lot of time using Dj pro and setting up all my cue points and settings.

I get that people are upset, but man…gear breaks, y’know?
You do: you are a professional if you’ve a backup system . That’s the “working in alternate ways” I mentioned.
I’m sure you’ll be back once you hear the issues have been put to rest. Maybe it’s a firmware update for the controller, maybe it’s a djay software thing…maybe even a bit of both so they talk nicely with each other again.

As much as I agree with you regarding a backup set up, the issue is with the Algoriddim and not the hardware…
I don’t know how long you have been a Algoriddim user for but this is not the first, second or even third time that they have released an update and it has caused issues that weren’t previously there, and then releasing ‘Fixes” for problems that they have caused with untested releases,
So yeah I get your point, but this isn’t a free app, this is an app that was once a one off fee and a simple djay app, but now has become a subscription app that users are paying monthly (or yearly) for a product that they want to work as described on the box…

this is the nature of anything involving code - it breaks sometimes. The measure of a company is how quickly it diagnoses and releases a fix for the issue.
But it’s summer in the Northern Hemisphere, and while it’s likely the busiest time of year for a working DJ, other people (normies), like those who write code, take vacation, so this may cause a delay…
I’m sure the company is learning some hard lessons at the moment.

This update stated that one of the reasons for it was to fix Rane One issues and this is the worst issue yet. Not being able to safely use the FX features or to analyze a playlist while playing music is a HUGE bug. The music should never stop because you choose to use a function. This is the worst update bug ever. I hope it is fixed before this weekend. DJpro can not call itself DJ pro and expect working Djs to use this app with bugs this huge. Does not happen with serato. Thats why serato is the standard. It rarely ever stops working. I have high hopes for Dj pro. I love the app and find it so much more useful than serato. I hope they test the next updates better. This was a poor release decision.

Thanks for reaching out about the issues you’ve encountered with the RANE ONE. I’ve seen that a member of our Development Team is already in contact with you via email. Please continue the conversation over there so we can get some more details about the specific issues you’ve encountered to determine if they are indeed the same as the ones already reported on the other mentioned thread:

I’m having a huge issue at a live show right now I am super frustrated. While plugging in my Rane one controller to djay pro on the new 14 inch MacBook…… the whole controller is glitching with the lights turning on and off, on the plus the sound is off as well. Turning off and resetting everything doesn’t work and I’m lost with options I’m so confused. Please fix this now!!! Before the update as well, Deck A filter knob is also glitchy and doesn’t work well. What’s going on with this app nothing…

To everyone else active on this thread and also on the other related thread above, rest assured that these RANE ONE problems are of the highest priority for our Dev Team and we hope to have a fix very soon. I’ll keep these threads updated as soon as possible.

Thank you Emily. I am going to do a video today.

Thank You Algo Peeps! The simple solution was to turn off Auto-Gain. For some reason this bug would default to the gain position (or turn off auto-gain) whenever I switched functions. Because I always have Auto-gain on and all the gain nobs turned all the way to the left due to other issues with it turning off by easily bumping it, the bug was turning off the auto-gain feature. I am back to loving DJ Pro! Thank you for the quick response! So Happy! I will always keep the gain at 12oclock now.

I will now but not my preference. i record a lot.

you should know how to adjust gain manually…and set the limiter in djay at -6 on the master. that leaves you with 23 bits of dynamic range to play with, 138dB of it…more than any PA in the world is set up to handle…
(I wonder if there’s a video on gain staging in the vault that’s specific to djay? I know there’s one about staying out of the red of the master/meters…)

Here are a couple of articles on Gain Staging. Not specific to Djay though. 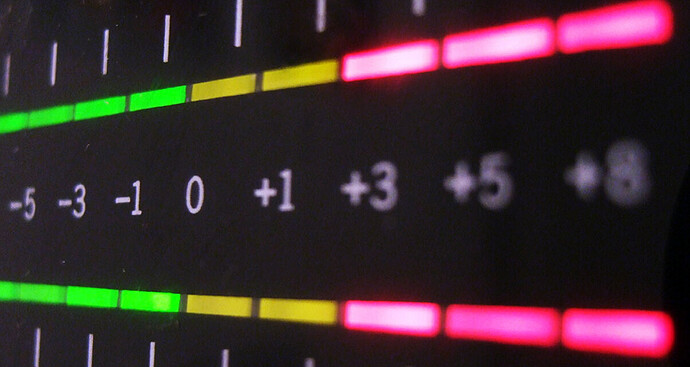 Learning to properly set the volume, also called gain structure, of the DJ equipment you are using can be the difference between sounding incredible and sounding like a complete novice. With so many different places to set your volume – your PA...

was rhetorical, but someone will find it useful…