I have chosen DJPro over other software and even CDJs as its so great. The effects, video functions, Ableton Link, real time warping, and now AI Neural Mix are unique features. Coldcut love remixing tracks live…a huge result would be the option to Loop BACK instead of forward. Im playing a tune, think wow that was an amazing break, but its too late to loop it. I want to hit loop and set it to loop the LAST x bars that played, ie the bit I just heard.
This could even be a global option so would require no GUI additions beyond that. PLEASE consider this which would IMHO really boost the remixing power and creativity of DJay. I see Brent_Meinema1 also proposed this in 2014 -and it exists in Traktor. Im also lobbying Pioneer to implement it.

Thank you for getting in touch and nice to have you on our community!

We are glad you like our latest features and are happy that you are sharing your feedback with us!

Looping back instead of into the future is something we will look into. It would be great if other users share their votes in order to push the topic.

Thank you for getting in touch and please feel free to share your feedback and suggestions any time.

Hey that’s acutally a really nice idea for a feature suggestion. Defenitely would support it. Ideally the detailed use case would work like that:

Precondition
Track is loaded and playing in the active deck.

The last step would have to options. And I am personally unsure which one would sound better:
a) Immideately jump into the loop when the loop back button is pressed OR
b) Let the current bar (4 beats) finish playing and then jump back exactly to the start of the loop n-bars before the drop.

I agree that would be a nice feature

I gave this some more thought. Let’s assume the following situation: 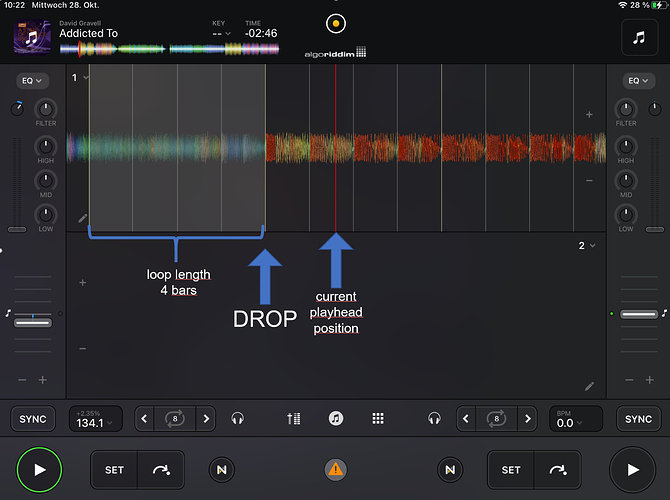 Where should the back-loop be?

First: that the drop was exatly at the end of the previous bar. Not in the middle of a bar at beat 2 or so. This assumption is true for electronic tracks and a correctly set beat grid. Our drops are always at the beginning of a bar at beat one.

Secondly: The DJ presses the “back loop” button still within the next bar after the drop. IMHO this precondition is fine.

Now the question is what SHOULD happen (in the above situation when the playhead already moved some more time)?

All three alternatives could make sense, depending on your music style. To IMHO this would need to be configurable.

Ah and even one more idea: Most of the time a DJ will have a cue point exactly at the drop. So there would be a third possibility:

When I press the loop-back button the create a loop that ends at the previous cue point.

Amazing feature idea and cool to know that Coldcut are using djay! In my mind, it would take the current beat as the last beat of the loop, so it would immediately loop back after the current beat. Would love to see that implemented!

thanks for support and ideas. Must admit I dont use pre made cue points that much, in my mind its more about a tune I dont know well and being able to recapture a good bit. I think Doogies preconditions are spot on. as for which loopback option is best, ie

probably A but would be good to have a switch. A is more how loop forward works , right?