I’ve discovered the problem @maurizio_T , both paddles are being recognized in error as the same midi note but separate 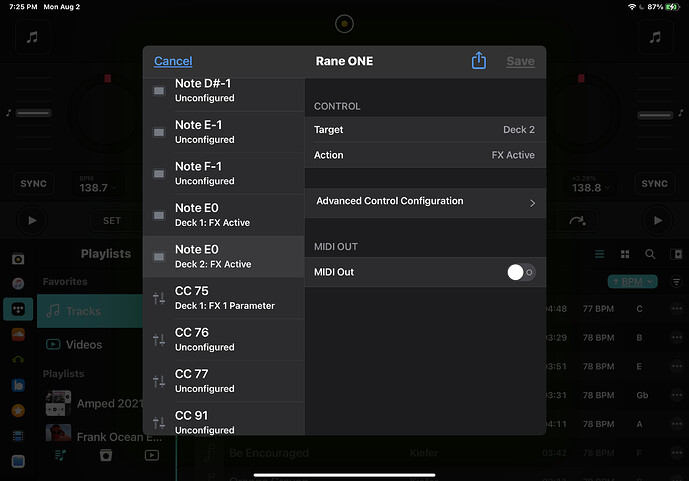 Yes Terrill you’re correct…
Both Paddles are assigned to the same midi note…EO
Trying to assign the left Paddle to Deck 1 and the Right Paddle to Deck 2 doesn’t work either as it only activates one Effect and I believe it’s the Echo effect, the FX Buttons don’t have any function.

I’m in the same boat, but I have done enough gigs now to know that I have to click on fx1 to echo out of the left deck and fx4 for the right deck. Though when I do forget it is not a pleasant mix haha, I would love to find a fix for this.

I don’t know if @admins are reading this thread and able to kick this bug up the chain but the paddles on the Rane One are incorrectly using the same midi note and would need to be sorted out on the software side.

Apparently DJ Carlo Attendido figured it out !!! In the vid he engages the right deck with FX 1 !!! check it out: https://youtu.be/mEweYdQKYiI

Noticed that too lorenmiller, I have left him a comment and asked him how he was able to map it…

So Carlo is using a Mac which explains why it works for him…At least we know that it can work as designed and hopefully they can fix it (along with the other glitches) in the next update.

I use a Mac and can tell you that it does not make a difference. Problem exists on both platforms.

Wow, well so much for that theory, although in the YouTube video you can clearly see that he is using each Paddle for their respective channel…The mystery continues…

New version of DJay just released. States improved support, precision and reliability with Rane One. I will be testing tomorrow to see if the FX mapping issues have been addressed.

Just tried it… doesn’t seem to work as expected. I can only establish assigning 3 fx to each deck. The paddles do however only activate the fx for the deck they are assigned to though. A slight improvement

Thank you all for staying active in this thread throughout this process. It’s great to have such an active community involved in improving the RANE integration with djay.

However, please note that djay only supports 3 FX per deck.

Thanks for confirming @Guillermo

Is there any intention to add the ability for the 6fx to be applied to each deck?

Is there any intention to add the ability for the 6fx to be applied to each deck?

Please note, I can’t discuss future plans/intentions. However, I can file a feature request for this. It would be great if you could set a separate thread for this request in order to better track the votes. Thanks in advance:)

Hi @Guillermo please do file a separate request so that the 6 fx can be applied to each deck. I believe that is what this thread initially set out to try to solve. That and the trigger issues.

@Guillermo Please add my +1 to this request for the ability to apply any of the 6 available FX buttons on the Rane One to deck A or deck B per their assigned FX trigger toggle.

Another +1 vote for the 6 FX pads.
Thanks for the update, it appears to have fixed the sync problem but I haven’t had a chance to properly put it to the test…

If my thinking is correct then Carlo Attendido must have gotten his hands on a beta FW, which means that Algoriddim is continuing to pursue and put out product/software aimed at working DJ’s and Carlo has formed a relationship with Algoriddim of some sorts. That is great to hear in my opinion!

@Guillermo Thank you for the patch!

Had a gig last night and the FX paddle fix was an absolute dream to work with! Unfortunately the BPM slider now has issues that are really annoying, anyone else experience this on the new FW?

What issues are you having with the pitch slider?