What is your mobile set up?

Hey, I’m still relatively new to DJing and have done a few gigs with my Pioneer WEGO3. It’s not bad but I would like more performance pads and different controls for the fx. I’ve kicked tires on a bunch of different controllers but haven’t found anything that’s inspired me to open the wallet. That got me thinking… what do other DJs use for mobile gigs?

I use both Mac and iOS but my preference is the iPad for DJay for gigs.

When I finally decided to ditch Vinyl and the Sl1200’s I tried a numark idjpro for a few years with Djay 2 which worked great but was a bit lacking in hardware features…
I now have a Rane one and married up to my ipad get 9, works a treat,when Algoriddim don’t stuff up their updates….

My main setup is a Denon Prime 4 with iPad Air 4, but my mobile setup for when I’m on the move is a Reloop Ready. I’ve had a lot of gear over the last 13 years and the Reloop Ready is one of my favourites. It has a lot of power in a very small package. Plus it can run off the iPad battery or an external battery pack.

I like it compact and use a minimal setup with DJay Pro on the iPad and a USB-powered controller. I used the DDJ 400 for quite a while, but now I usually use the Inpulse 500 in white because I find it more visually appealing, and there are also colored performance pads available.
Of course you are often smiled at with such a setup, but it is also a statement. And in the end it’s the result that counts, and expensive equipment alone doesn’t make a good DJ

Thanks! Why the ready over the buddy? Just curious…

I could probably work with the ipad alone but how do you interface with the sound system or set up a microphone?

I built a HiFiBerry streamer box with this back when Raspberry Pi4s were more easily obtainable at a reasonable price. I chose the HiFiBerry DAC daughter cards (one with XLR outputs, the other with RCA, so I can easily interchange as needs dictate). HOWEVER- if you’re going to do this, make sure the Pi can connect over ethernet to the same network your iPad is on. Connect iPad to Pi with AirPlay, and Bob’s your uncle (I call mine Rob). WiFi has better range than bluetooth too, so pay attention when connecting the two.

I’d love for the HiFiBerry cards to be recognised/certified by the MQA association so that they could be used with TidalConnect (which I asked algoriddim to consider integrating into djay), but MQA is pretty specific (closed-minded - AHEM!) about protecting that brand

@Rob_Engelhardt I specifically chose the Ready over the Buddy because is has larger performance pads, more advance FX control and gain control. I typically make heavily customized MIDI mappings to suit my DJing style and work flow and the Ready has more MIDI mappable controls than the Buddy.

@Rob_Engelhardt you’ll probably be happier with some kind of MIDI controller, but you could use a basic DJ headphone splitter cable. This allows you to split the audio out from the iPad into 2 mono signals. One for pre-cueing in your headphones and one for your sound system: 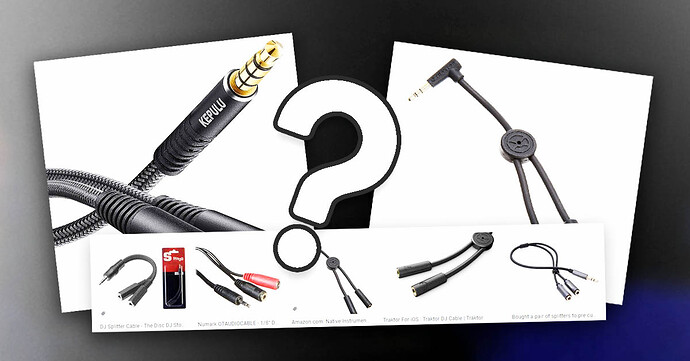 If you need a microphone, alternatively you could get the Firefly cable, but it’s not cheap: 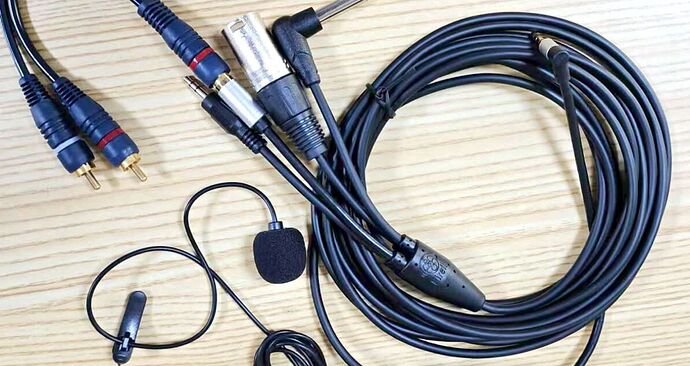 A new boutique "DJ cable" has just gone on sale, which aims to make it easier for DJs to perform with a phone app.

The iPad alone I use so far only in the circle of friends at garden parties or similar, but then with various adapters and without microphone: iPad → 3.5 mm jack → Native Instruments Traktor DJ Cable → headphones & amplifier or speakers.
But the already mentioned here " Firefly DJ Cable" is of course a bit more elegant and also offers the option for a microphone. I didn’t know that yet, so @Slak_Jaw: Thanks for the hint.

I’m also curious about the audio quality of the Reloop Ready/Buddy - I have the same issue with the Mixtour, sound is just ok - decent but not great. It’s a great portable MIDI controller - just let down by the sound. Still using my 6-year old Traktor Kontrol Z1 for my mobile/portable setup because the Z1 audio card wins hands down in terms of sound (especially on a large club system). Still looking for that perfect “portable” system that fits in a single bag!

One thing I like about the Ready/Buddy - it has a dedicated iOS USB port - so do the Traktor S2 Mk3 and Traktor S3. But as always - audio quality is my main concern - so I’m hesitant to purchase until I can A/B in a club.

This setup (below) is very portable and easily fits in a laptop bag. Works great in macOS (djay and Serato) - unfortunately, the DAC only has 1x stereo channel - so it doesn’t work well in iOS - you can’t use 2 audio cards like this in iOS (only 1 allowed at a time). 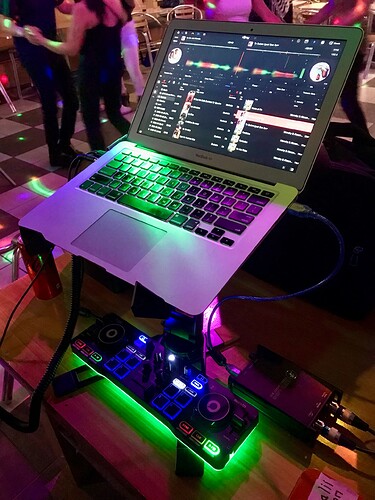 My current “favorite” portable setup is the Traktor Z1 + Hercules Starlight as controller (see photo below). Works great in macOS where the Z1 can still act as a MIDI mixer - and I can remap the knobs on the Hercules to control FX and loops. Downside, in iOS, the Z1 only acts as a sound card (no MIDI controls). In that case, I use the Hercules Starlight + iPad touch screen - still a good option, but not optimal.

An A/B test at the club - (Mixtour / iPad Pro, Hercules Starlight, Traktor Z1, Denon MC4000). On this club sound system, the Traktor Z1 won hands down, the Hercules Starlight and Mixtour were “just ok”- and the Hercules edged out the Mixtour (probably because it’s 24-bit vs the Mixture’s 16-bit). The Denon MC4000 was quite good and was basically equal to the Z1 - though very different sound signatures. 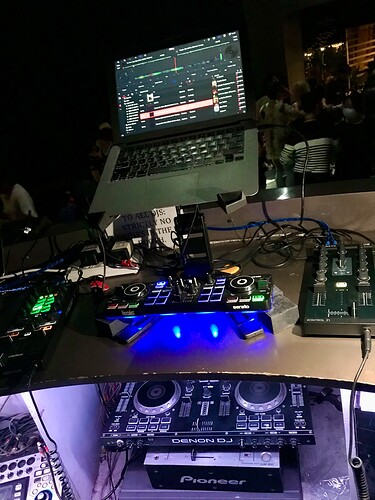 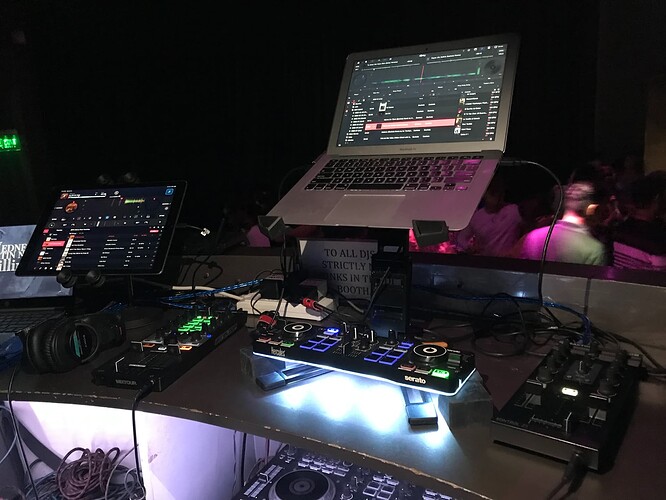 A simple option - with purely touchscreen MIDI controls. Love that the Traktor Z1 has a direct lightning USB cable (no need for Apple adapter). 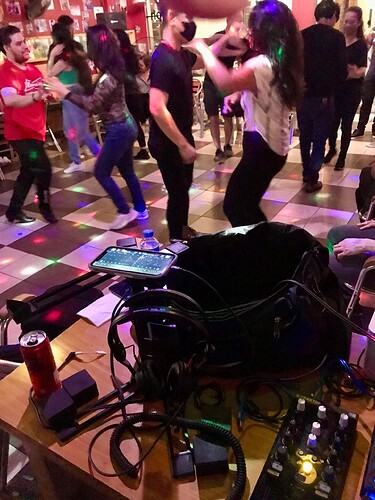 An interesting A/B between the Z1 and the SSL 2+ audio interface. The SSL 2+ was crystal clear and made everything sound great. Sound was excellent and non-fatiguing. But the Z1 put up a good fight, it was nowhere as clear as the SSL 2+, but it offers a very punchy sound which works well on the dance floor. If the SSL 2+ made the sound feel like crystal clear blue Caribbean waters, the Z1 made the sound feel like a bubbly jacuzzi - a lot of fun on the dance floor. Though after doing a couple of gigs with the SSL 2+. - I’m starting to notice how fatiguing the Z1 sounds after a few hours. 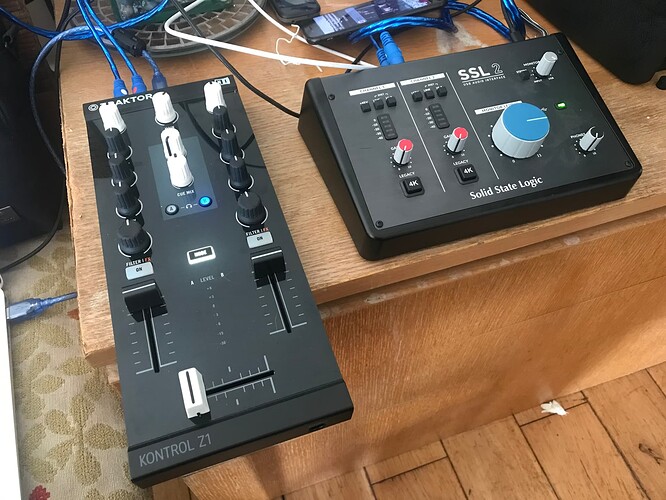 For a portable iPhone/iPad setup - I like using the Z1 (audio card only) + DJ2GO2 Touch. The Hercules Starlight is a good match for the laptop, but the DJ2GO2 Touch makes more sense with an iPhone/iPad. 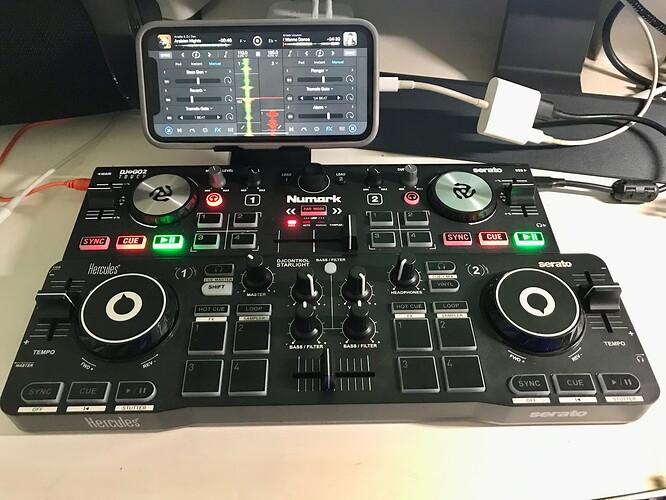 Thank you for bringing this piece (The SSL2+) to my attention - it is precisely what’s required in a situation I’m involved in!
The SSL has the same level converters in it as are used in recording studios. The ones in the other piece are “commodity” electronics- the “warm bubbly” sound is poor clocking and phase shift, and auditory mechanisms do indeed fatigue when our brains try to compensate for the shortcomings of the electronics. I’m already considering suggesting to SSL that they start to get these products certified by the MQA for Tidal compatibility at the highest resolutions.
Now, for the algoriddim devs - how possible is it to integrate Celemony’s Melodyne into Neural Mix? That’ll be some serious fun …er, tools.

I suggest looking at the MOTU M4 or Audient ID14 as an external sound card - they both officially support iOS - specifically they support the low power draw from the USB bus.

Or even better, skip the bus-powered audio interfaces and go for one with a power supply like the Volt 476 or Scarlett 8i6 - this way there aren’t any power draw issues with iOS.

My main problem with the SSL 2+, is that it doesn’t officially support iOS Lightning devices (due to the power draw). You really have to make sure the SSL 2+ has full 5V power or the sound output suffers - that means a robust powered USB-A 3.0 Hub (not just any old budget one). Or maybe a fully powered USB-C hub.

Lightning connections/power draw issues are irrelevant/moot: I’m looking at the SSL 2+ to pair with an iMac (and to replace the existing DJ mixer it’s currently feeding from the headphone output )…in a fixed installation.

@Kaloyan well sound quality is a very subjective and personal thing. Personally, I’m very happy with the audio quality of the Ready, however, I haven’t used it on a big club system yet and that’s not really what I bought it for. For big gigs I use my Denon Prime 4. I also had a Mixtour and thought the audio quality was fine. I recommend you start by comparing the soundcard specs of the Ready, Mixtour and Denon 7000. Next step would be to borrow one to test yourself or buy from somewhere with a good return policy.

Same, the Buddy is my backup and small party controller…
The Rane one is for serious events, although l no longer play in big clubs not for years

you’re good for posting tutorials about how to do things: may I suggest one about reading and interpreting (audio) specs?

Honestly, that’s really the only way to do it, you have to A/B these devices with your ears / in person - using a live sound system (not a clinical bedroom/studio/audiophile setup). The published technical specs are general clues, but won’t tell you how a device actually performs in a live situation/venue.

Also - even if the Mixtour scored low in my A/B tests - we’re really talking about the difference between good and great. None of them sound “bad”. The Mixtour is still one of my favorite MIDI controllers, especially for iOS. I’m not selling it anytime soon, but if I know I’m going to be in a club with a kick-ass sound system - I’m looking for a better sound card. The clarity and separation you hear in a better sound cards becomes very noticeable when playing on a good large system.

— and continue searching for that “Forever Controller”