Please add the ability to create Custom Names for each Cue Point like in Traktor and Serato. I like to use names like “VocalStart”, “MixIn”, “MixOut”, etc. This could be added to the Cue Point Edit function. The editable names could appear on the Cue Point buttons below the Time (see attached). Thanks. 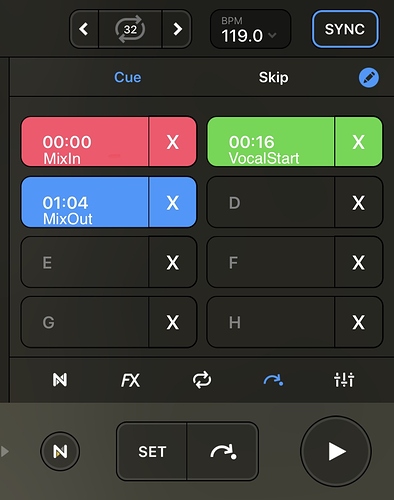 This would be genius

Thank you for the suggestion. We pushed the issue on our issue tracking system and it would also be great if other users can push the topic by upvoting.

Yes! This is a great suggestion

I thought of this the other night, glad to see it’s already been suggested…not just me then!!

Yes, yes, all kinds of YES! There should be as much feature parity between iOS and Mac (and Windows, too) as possible, especially since naming cue points is available on the Mac. As I like to prepare cue points on my iPad, naming them there would be highly useful.

Also just as good would be the ability to choose cue point colors on the iPad. I’m unsure if it’s on the Mac version, but I would actually use the colors with the cue point name and would be very useful.