Yes, i also did the same. Originally Algoriddim told me that my reloop beatpad was defective and that i would need to contact reloop and send it for repair.

I emailed reloop and explained the issue all over again and straight away they told me that it is a known issue, that the beatpad was not defective and that it is a software issue.

I then contacted Algoriddim support again who didn’t want to accept that reloop had said these things so i had to forward the emails i received from reloop to Algoriddim.

Algoriddim then said that they would contact reloop themselves over the issue but the outcome was ever fed back to me.

I am now waiting for a list of all working devices to be released.

I’d just like to clarify a few things about Android devices, djay for Android, and our natively supported controllers, as from many of the posts on this thread there seems to be a lot of confusion around this topic. 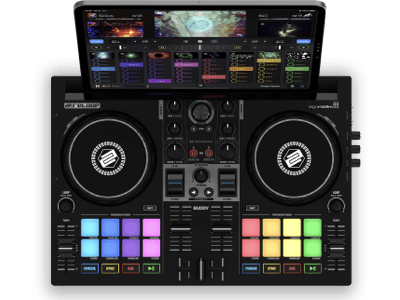 That said, unfortunately it turns out (and some users have reported) that some Android devices do not fully support audio output via external multi-channel audio interfaces such as the ones built into these MIDI controllers, which can result in distorted audio output or no audio on the controller’s headphone output.

As others have said on this thread, Android can be a rather complex environment, as there are many factors that might be contributing to your specific Android device not working with djay and its supported controllers. For example, the particular tablet/phone itself and the Android version are two such possible contributing factors.

Our best advice at this moment is that if your Android device does not work correctly with an external device, please first ensure that you have installed all available software and security updates for your device using the Android settings app.

In addition, our team is in touch with the respective manufacturers to get this resolved, but for the time being we can regrettably not offer the full djay experience on some devices. I hope this information is helpful in clearing some things up here, and please don’t hesitate to reach out with additional questions or feedback.

Yeah, I posted a screenshot of the midi controllers that are natively supported in this discussion quite a while back

I actually used that list as a guide when I was looking to purchase a controller. This was to make sure that I got the right one and that everything would work with the Algoriddim app. Based on the list, I purchased the reloop beatpad.

I also purchased a samsung galaxy tab S7 plus to use with the app and controller but this configuration never worked and no matter what I did, I could not get any audio to come through the headphones. The controller is totally useless without this very basic but necessary feature.

At first I thought I had wasted money buying a tablet specifically for djaying but was satisfied that I had enough android devices around my home that I would get it working, albeit, on a smaller screen. Unfortunately, I couldn’t have been more wrong and it turns out that I have wasted money purchasing the supposedly natively supported controller as well.

So after testing on my samsung tab s7 plus, I plugged the controller into my samsung galaxy note 10 plus. Once again, no audio through the headphone output.

Thinking the problem might be a compatibility issue with samsung devices, I then moved on to other brands of android device. So, I tried no less than 3 different sony android phones, 1 sony android TV, various different generic android TV boxes and 1 nvidia shield.

All these devices currently have the lastest available android version. Some devices, have even been tested on multiple versions of android, ie, my tablet and phone have gone from android 10 to android 11 to android 12 over the years that this problem has been in existence.

During this time I have also seen multiple threads created on here, mostly customers complaining of the issue, with an odd comment from a moderator, once every 6 months promising that the issue is being worked on etc and then those threads get closed down due to inactivity.

So I have tested 8 android devices, ranging from android 8 to android 12, different brands of android device, different types of android device ie tablets, phones, TVs and TV boxes etc and absolutely none work. This kind of begs the question, which devices do actually work because from my point of view it doesnt look like any do.

I have asked Algoriddim support if they can provide me a list of devices that work but they cannot provide me with this infromation. Month after month, they respond to my email saying they are still working on a list. Getting rather frustrated and fed up with having to wait years for a solution or even an update, I asked them if they could please let me know of any devices that they know to work with the app and natively supported controllers and they declined saying they will release a full list some time in the future.

My question to you @Emily is, do you know of any android devices that work with the natively supported controllers and Algoriddim djay app? The chances are you don’t, will fail to respond to my question and I won’t hear anything more from you until of course, I post a comment in a different thread and you inform me that you removed it for being in the wrong thread. Obviously my comments belong solely in threads that are destined to be closed due to inactivity.

@Emily we was in the process of clearing up the confusion that you mentioned but you have now gone quiet since I asked you a question.

We have established that the majority of us have purchased the recommended, natively supported, Algoriddim endorsed midi controllers but it would appear that we have also all purchased incompatible android devices.

The only feasible solution to the problem is to purchase another android device that is compatible.

So what android tablet works correctly with the list of natively supported midi controllers that you highlighted in your post?

It ahould be a very simple question for Algoriddim to answer, I’m not asking for a full list, I am literally asking for one device to be named.

@Emily people have obviously tested a whole host of android devices so we can rule out all these in previously unanswered and subsequently closed down threads.